How do you conduct an R&R study?

The objective of a simple R&R study, which can be done using software such as GAGEpack, is to determine whether the measurement system in use can adequately distinguish between or among units. There are a number of factors that affect the ability of a measurement system to discriminate among the units it measures. These factors may be categorized as those that typically contribute to any process variation: machine (the gage), operator (appraiser), method (method of measurement followed), material (units being measured), and environment.

In conducting a simple study, an attempt is made to minimize or hold most of these factors constant. (Note: the study should replicate as much as possible the conditions under which the process measurement is occurring. This essentially means that if production operators are making the measurements, the study should use production operators under the same conditions that exist when they are "normally" measuring the output. The study should not be conducted using quality technicians in a lab.) Therefore:

The two items that are specifically varied are the number of appraisers and the number of units measured. The selection of these two factors is critical to meeting the objective of an R&R study.

The second is the number of parts, generally between 5 and 10. The major factor to consider in selecting the parts is that they need to represent the total variation for the characteristic being studied for the process producing them. This means that going down to the line and pulling 5 to 10 consecutive parts or going to a bin and selecting 5 to 10 parts, is a not acceptable. The selection of the parts must be spread out over time so that the parts represent the "typical" variation in the process.

The final parameter is the number of replications, generally 2 or 3. A single replication will not allow for separate estimates for equipment variation and appraiser variation. Too many replications complicate the study without adding much value to the analysis. To be statistically sound, take measurements randomly (see note below). This confounds the factor of time, different in these repeated measurements, from appraisers and parts. As a practical matter, it often comes down to making sure that the appraiser does not know which part is being measured (randomizing the order of measurement) and no appraiser completes two replications before the others finish one replication. For example:

This results in something like Table 1 below once the data are organized.

If you enter this type of information in GAGEpack as an R&R event, GAGEpack will calculate R&R percentages. 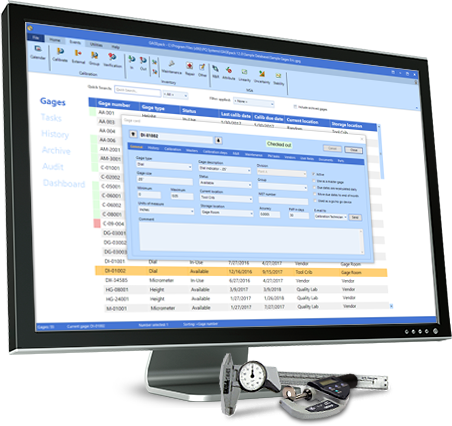