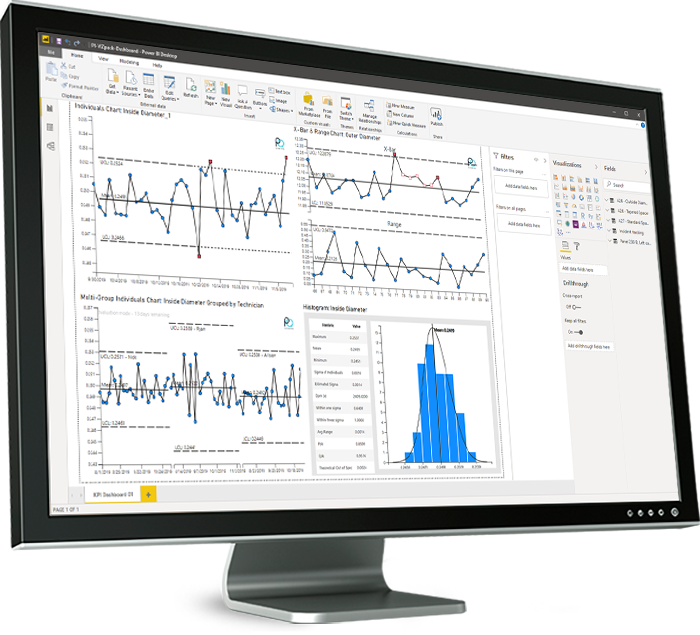 Businesses that are devoted to continuous improvement can leverage the power of control charts with the flexibility of Power BI to increase consistency and drive quality outcomes. No need to develop custom visuals when PI VIZpack offers all the critical process improvement visuals right out of the box. 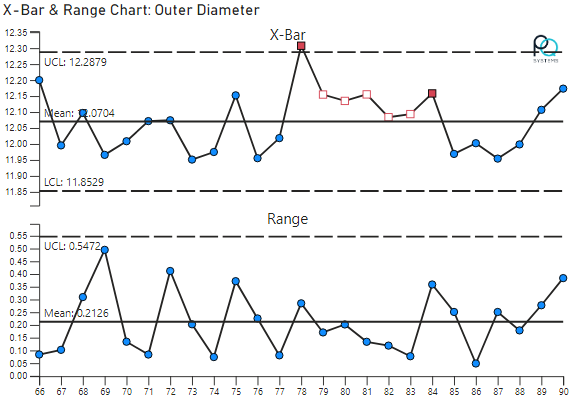 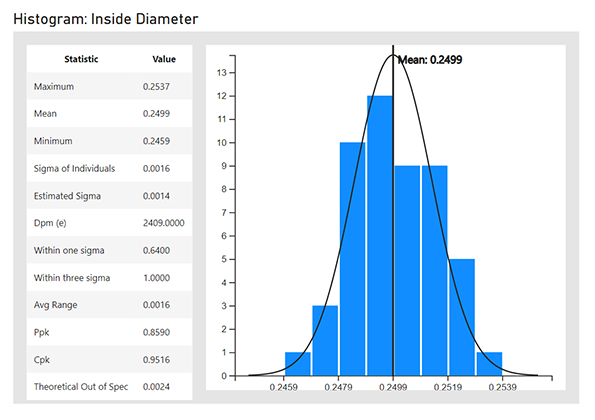 Histograms with critical indices such as Cpk, Ppk, and "expected defects per million" help determine if your process is capable of producing output within specification limits.

Process Improvement (PI) VIZpack includes all of these visuals for Power BI:

Analyze process stability for a process with a subgroup size of one.

Analyze process stability and variability for a process with a subgroup size of one.

Analyze process stability for a process with a subgroup larger than one.

Analyze process stability and variability for a process with a subgroup larger than one.

Visualize the distribution of data as well as capability indices such as Cpk, Ppk, & Dpm.

Analyze a count of nonconforming (defective) units where the subgroup size varies.

Assess the count of nonconformities (defects) per unit where the subgroup size varies.

Easily identify which segments in your process are introducing exceptional variation.

Control charts help predict the performance of processes and serve as the cornerstone of Statistical Process Control (SPC). Control chart and other improvement chart visuals indicate areas in which opportunities for improvement exist.

The control limits are lines on a control chart used as a basis for judging whether variation in data on a chart is due to special or common causes. They are important in helping your organization react to statistically significant signals in the data and avoid over controlling or under controlling. Control limits are calculated in such a way as to anticipate the common cause variation in a system. They are calculated on the basis of approximately three standard deviations from the average of the data.

Control charts are often used in pairs. The top chart monitors an average of distribution data, while the bottom chart monitors range and width of distribution. They are highly effective tools to study how a process or system changes over time. Control charts discriminate special from common causes of variation, to help you understand how to improve a process. Control charts are useful for understanding all types of data collected over time and help you take timely action when problems occur.

Control charts should be used in your business to:

To successfully use control chart visuals for improvement, follow these steps:

Get started with PI VIZpack and your quality data today.

Our team of experienced quality experts work with clients to implement solutions that meet their unique needs. We provide flexible software, quality improvement consultation and training, and unrivaled customer service.